During 2004 several volunteers got together and formed B.E.G. They have several projects under way:

Sheep. In late 2003 Shell kindly donated some money to the group to enable sheep hurdles to be bought; forming a portable fence, they allow sheep to be kept in the churchyard and rotated as necessary (not literally - turntable on order). 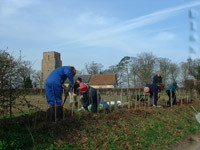 Hedges. 100 metres of hedge were planted by the group last year with another 100m planned for this year. The hedge planting scheme is supported in part by SCDC, but the group are all volunteers.

Bird Boxes. Frank Pynn has been busy making bird boxes which have been going up around the village.

Blaxhall Environment Group now has a Co-op dividend number. So if you would like to support them in their work please give the number 266636 when you shop at the Co-op.